coming soon~~ forms made mobile: an evening with Kerry Laitala

forms made mobile: an evening with Kerry Laitala 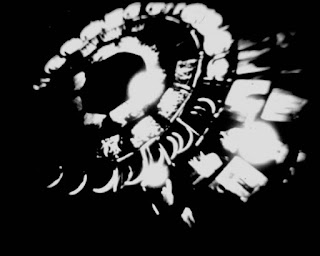 the latent image presents a program of films by local filmmaker Kerry Laitala alongside 16mm prints from her personal collection and more. Laitala’s work synthesizes ideas and ephemera from the realms of science, history, and technology. Her multifarious investigations into evolving systems of belief involve installation, photography, para-cinema, performance, kinetic sculpture, and single-channel forms. Special live sound to be performed by Cyrus Tabar. 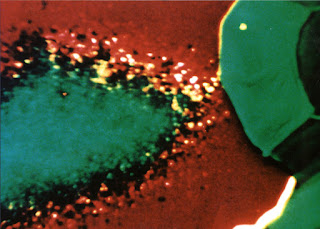 Seeing the Unseen (Harold Edgerton, 16mm, b&w, silent, 20 min, 1936)
Print courtesy of Kerry Laitala
Seeing the Unseen is a silent black-and-white film that Harold E. Edgerton produced in October 1936 to showcase a variety of examples of his stroboscopic and high-speed photography work.
Retrospectroscope (Kerry Laitala, 16mm, b&w, silent, 6 minutes, 1997)
Print courtesy of the maker
As a paracinematic device, the Retrospectroscope traces an evolutionary trajectory, encircling the viewer in a procession of flickering fantasies of fragmented lyricism. Streams of images revolve around in an attempt to harness notions of a cinematic prehistory tracing past motions and gestures to burn the dance of the Muses of Cinema on the surface of the retinas.

Hallowed (Kerry Laitala, 16mm, color, sound, 11 minutes, 2002)
Print courtesy of the maker
Hallowed portrays a mystical voyage made back in time by an unconscious woman in the throes of a cataleptic state. She finds herself in Plato's cave where flickering flames incite a prehistoric cinematic reverie evoking an experience of magical proportions. Hallowed evokes a transcendent state that could only be traversed and negotiated through ritual contemplation of the elusive pictograms and archaic petroglyphs on the cave wall, as the realm of cinema becomes an antidote for the emptiness of earthly existence.

Out of the Ether (Kerry Laitala, 16mm, color, sound, 11 minutes, 2003)
Print courtesy of the maker
Out of the Ether re-assembles disquieting images from decades-old hygiene and science films, merging them with the filmmaker’s own Bolex camerawork. It was re-photographed on the optical printer, toned and tinted to bring out pulsating hues of oozing greens and yellows.


the latent image is generously supported by Southern Exposure.